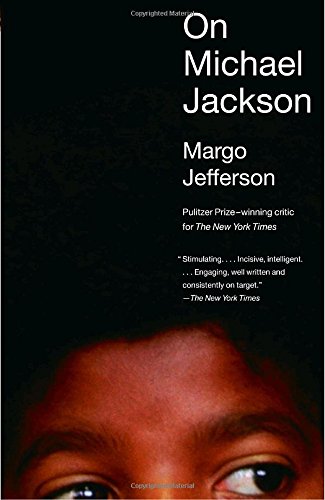 Brand : Margo Jefferson
from USA
to PAKISTAN
in 5-8 days
At your doorstep by Jun 26  to Jun 29 with standard delivery

Book Description Margo Jefferson’s On Michael Jackson is a lucid and elegant cultural analysis of the rise and fall of the King of Pop. An award-winning cultural critic, Jefferson brings an unexpected compassion as well as her sharp intellect and incomparable insight to Jackson’s 2005 trial for child molestation, startling us with her erudite illumination of a media-drenched circus that we only thought we understood. As only she can, Jefferson reads between the lines of Jackson’s 1998 autobiography as well as published accounts of his childhood, his family, and Motown--where Michael and his brothers first made the Jackson 5 a household name--leaving us with provocative and perhaps unanswerable questions about Jackson, child stardom, and fame itself. Margo Jefferson on the Life and Death of Michael Jackson Pundits love to talk about the crises and cultural flashpoints that give Americans the chance to grow up and think outside of the usual dualities: this is good, that is evil; we hate her, we love him. Michael Jackson’s death gives us yet another chance. Talent, scandal, sudden death, and a 24/7 media cycle make us very worshipful or very cynical. We can do better this time around. We don’t have to sneer or be pious. We know Michael Jackson was a genius, and we know he became a tortured soul. The first three days after his death were our grace period. We watched videos, replayed our favorite songs relived our youth, and waxed nostalgia about the good old days when all we had to deal with was his enormous talent. And though I never much liked the song, "we" were definitely the world--crowding onto streets, into theaters and parks, dancing (or at least swaying) to his music. North and South America. Europe. Africa. Asia. Only Antarctica and most of the animal kingdom stayed uninvolved. Then the nasty stuff started creeping out again, like the ghouls in Thriller. Drug reports, rumors of custody wars, tours of an empty Neverland, memorial extravaganza plans; the sight of Michael’s father hustling family unity along with his new record company; the statements and counter-statements of siblings, lawyers, ex-employees, companions and bottom-feeders. And, of course, the three children. Whatever we don’t know about them, we do know they’re worth their weight in gold records and posthumous business deals. And it’s only just begun. But we can live with the damaged life and the great work: both of them, all at once. We have to. So much of Michael Jackson’s damage reflects the worst in our culture, and so much of his talent reflects the best.--Margo Jefferson (Photo © Brent Murray)
Show More
Reviews