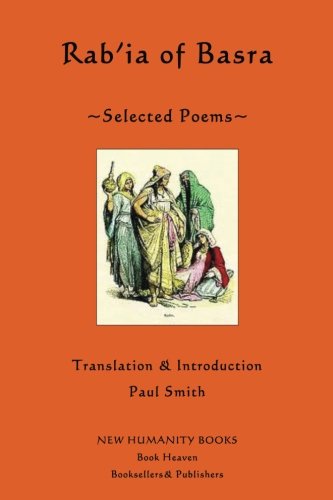 RABI’A OF BASRA: SELECTED POEMS Translation by Paul Smith RABI’A OF BASRA (717-801). Throughout her life, her Love of God, poverty and self-denial did not waver. She did not possess much other than a broken jug, a rush mat and a brick, which she used as a pillow. She spent nights in prayer and contemplation, chiding herself if she slept because it took her away from her active Love of God. As her fame grew she had many disciples. More interesting than her asceticism is the actual concept of Divine Love that Rabi’a introduced. She was the first to introduce the idea that God should be loved for God’s own sake, not out of fear -- as earlier Sufis had done. She taught that repentance was a gift from God as none could repent unless God had already accepted him and given this gift of repentance. She had a high ideal, worshipping God neither from fear of Hell nor from hope of Paradise, for she saw such self-interest as unworthy of God’s servants; emotions like fear and hope were like veils. She is widely considered the most important of the early Sufi poets. Here are most of the small number of poems that survive in the forms they were composed, an introduction on her life and times, a chapter on Sufi poetry. 107 pages. COMMENTS ON PAUL SMITH’S TRANSLATION OF HAFIZ’S ‘DIVAN’. “It is not a joke... the English version of ALL the ghazals of Hafiz is a great feat and of paramount importance. I am astonished.” Dr. Mir Mohammad Taghavi (Dr. of Literature) Tehran. “Superb translations. 99% Hafiz 1% Paul Smith.” Ali Akbar Shapurzman, translator of many mystical works in English into Persian and knower of Hafiz’s Divan off by heart. “Smith has probably put together the greatest collection of literary facts and history concerning Hafiz.” Daniel Ladinsky (Penguin Books author). Paul Smith is a poet, author and translator of many books of Sufi poets of the Persian, Arabic, Urdu, Turkish, Pashtu and other languages… including Hafiz, Sadi, Nizami, Rumi, ‘Attar, Sana’i, Jahan Khatun, Obeyd Zakani, Nesimi, Kabir, Anvari, Ansari, Jami, Khayyam, Rudaki, Yunus Emre and many others, as well as poetry, fiction, plays, biographies, children’s books and a dozen screenplays.
Show More
Reviews